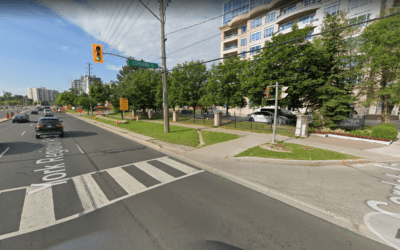 Antisemitism on the Sidewalk

My parents have told me about the antisemitism they faced growing up in the USSR, having been verbally abused as well as physically hurt simply for being Jewish. I’ve also witnessed a lot of antisemitism on social media and I’ve heard stories from others, however, I had never experienced antisemitism first-hand. That was until the afternoon of September 18th, the eve of Rosh Hashanah, the Jewish new year.

I was taking a walk near Bathurst Street and Steeles Avenue in Thornhill – an area home to a significant number of Jewish people – when I saw a man walking toward me on the sidewalk. At first I didn’t pay attention to him, until I heard what he was yelling. “If you’re Jewish get off the [expletive] sidewalk,” he said. I had never before been made to feel afraid because of my Jewish identity, but at that moment, I was petrified. I suddenly felt lost, disappointed and all I could think about was getting home safely.

Why should I be made to feel so vulnerable and insecure simply because someone else is so full of hate? I believe that no one should feel uncomfortable in their own skin or be ashamed of their beliefs, which is why I’m bringing awareness to this topic.

Unfortunately, this isn’t the only recent incident of antisemitism in the area. According to Friends of Simon Wiesenthal Center, there were swastikas and the words “All Heil Hitler” found written on a wall at Dublin Heights Elementary and Middle School in May and there was antisemitic graffiti discovered at Ledbury Park Elementary and Middle School in April. These are just two of more than 2,000 antisemitic incidents that occur in Canada each year, according to the 2019 Annual Audit of Antisemitic Incidents, produced by B’nai Brith Canada’s League for Human Rights.

Words don’t begin to describe how awful it feels to know such hatred exists. However, I’m exceptionally fortunate to be growing up in one of the most diverse countries in the world, and though I will never understand why some people go out of their way to be so cruel, I believe it’s important to become informed, raise awareness, and stand up against antisemitism.

If you experience an antisemitic incident, you can report it to Toronto Police or York Regional Police as well as organizations like B’nai Brith Canada and Friends of Simon Wiesenthal Center.

As a member of BBYO, a pluralistic Jewish teen movement with chapters in more than 50 countries around the world, I’ve been able to develop my own personal Jewish identity and create lifelong friendships with a great group of like-minded teens.

When this antisemitic incident happened to me, I turned to BBYO for guidance. The girls in my chapter, Chaverot BBG #2307, supported me, and our chapter advisor connected me with resources so that I could report what had happened. I am extremely grateful that I have so many friends that I can count on when I need them most. 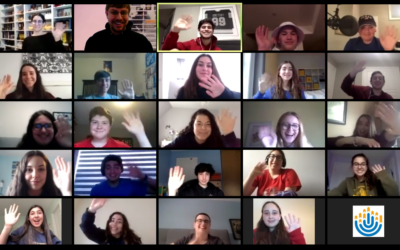 In Times of Uncertainty, This is Exactly What Brings LOR Together!

With Spring Virtual Retreat just a few days away, the Steering Committee is working hard to give each member of Lake Ontario Region (LOR) the feelings of a BBYO convention at home! With that being said, it has not been easy. I applied to be part of the Spring Convention Steering Committee back in mid-march for the position of Hospitality Captain. This role ensures that members are having a good time and are engaged in convention programming. Of course, I never thought that a pandemic would affect Spring Convention until it did. Everyone’s original ideas for Spring Convention were based on an assumption that it would take place at Camp George. We had to reframe our ideas and think outside the box. Spring Virtual Retreat will be our first online convention, and it’s going to be a game-changer!

My name is Jadyn Right, I am a member of Chapter Dor Chadash BBG #2404, and this is my first year in BBYO. The moment I walked into my first BBG program at the Schwartz/Reisman Centre, I was so amazed by the welcoming environment. I was eager to learn more about BBYO and how I could become more involved. From chapter programs to regional events, BBYO became something I looked forward to every single week. I first became involved in my chapter by taking on a chair position, and soon after, I decided to apply for Press Corps, Lock-In Steering and Spring Virtual Retreat Steering. I am so thankful to have these various leadership opportunities at such a young age, and that’s what I value most about BBYO.

When heading into our first Spring Convention Steering Committee call, none of us knew what to expect. However, we had two amazing convention coordinators, Mitchell and Sydney, alongside our regional staff, Kevin and Rae, who helped us imagine the possibilities. Through this ‘New Adventure’ (which became the convention’s theme), all Steering Committee members have learned that any challenge, even trying to reimagine Spring Convention as a virtual experience, can bring an entire community together. The transition from ‘IRL’ (in real life) to online was quick and smooth. We are so excited to have all five Canadian regions come together for our annual Maccabiah (colour wars), all online, which is something that could not have happened if Spring Convention was at Camp George! We have so many surprises just waiting to be found out. We have adapted so many traditions and rituals, and we have even found a way to have online senior life books (members write messages to graduating seniors) and warm and fuzzies (participants send kind messages to other members)!

This Spring Convention Steering Committee has been incredible! Every member on the team has been so fun to work with, and I am so glad that I had this amazing opportunity. As the tagline says, ‘BBYO is definitely not cancelled, it’s just online’, and Spring Virtual Retreat has proved it to me. I hope to see all of you there! This awesome regional event starts on Saturday May 16 2020, and you won’t want to miss it! 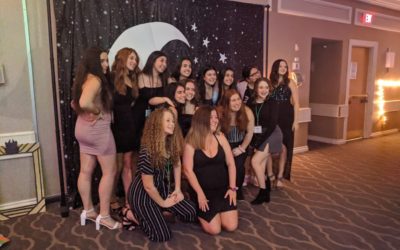 Welcome to our Blog!

BBYO is filled with leadership opportunities, whether you come in as a leader, a follower, or unsure what BBYO even stands for. The skills BBYO provides us, like leadership, public speaking and program planning, can help us all throughout our lives. From school and work to your personal life, everything you do relies on some of these BBYO lessons, all hidden within games, activities, applications, committees, and some of the best years of your life.

Like most 13 year olds, I considered myself to be a follower, a little awkward, quiet, and generally normal. Then, like many of my brothers and sisters, I joined BBYO completely clueless, and was instantly hooked and wanted to do as much as I could. I quickly started to become more confident, more likely to speak-up, and a leader. All things I previously thought were too far out of my comfort zone. I got to steer this year’s fall convention, become a chapter chair, help plan this year’s J-Serve, and be on LOR’s Press Corps team.

Our regional Press Corps Committee is a team of 12 passionate members, ranging from 8th-12th grade, selected by our Regional Mazkirim (VP Communication) to elevate regional communication and publicity. We take pictures and videos at events, we’re making a yearbook, and of course managing this blog! I applied because I thought I would enjoy these duties and I decided that my approach for BBYO would be to go for anything I could, because you can never truly know the impact these opportunities can have on you, and they don’t always come around twice.

This blog will feature posts such as this one, written by teens from all around the Greater Toronto Area. We will use this as our platform to express our opinions and beliefs, report on what’s going on in Lake Ontario Region and showcase everything that makes our region special! Any member from the region can write a blog post! If you would like to write a post, let a member of the Press Corps or our Regional Mazkirim know! We are so excited for all the great things to come this year and can’t wait to continue to showcase it here!