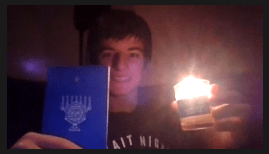 I think everyone can agree that the past year has been challenging, and even though more than a year has passed since lockdowns and closures began, it is still challenging to adapt to this reality. But despite all that has happened, there was one thing that got me back on my feet: getting involved in BBYO.

The grass seemed greener as I started feeling confident again, I would laugh and forget all of the negativity, and a new perspective of the world emerged. Without a doubt, joining BBYO had a huge impact on my newfound positivity, and so even though I probably didn’t experience a traditional entry to this organization, I know that attending my first chapter program on a random Wednesday back in September was the best thing I’ve ever done, and my highlight of 2020.

Looking back, the summer of 2020 was by far my lowest point. My grade 8 graduation was replaced by a short buffering video, and I quickly lost touch with a lot of my good friends that I bonded with in elementary school. With extracurricular activities being cancelled and city-wide closures, there was simply nothing to do.

By the fall, as the number of cases of COVID-19 slowly descended from the initial spike, I noticed that while I was lying around doing nothing all day, my sister Brittany kept busy with BBYO. I knew of the organization as I had attended a few programs the year before, and I had volunteered at a JCC hanukkah party with BBYO members, but I never joined because of all the other things I had going on at the time. That’s when Brittany suggested that I try it out again, and she convinced me to attend chapter Exodus AZA #1111’s fall kickoff.

Walking into the Exodus program, I already somewhat knew some of the guys there, but what I didn’t know was how much this chapter would impact me in the coming months. Though the event was socially-distanced and we all wore masks, I really connected with the members, and found that these people were going through similar things as me. Then, after attending a few more programs and becoming a member myself, my school friends that I’ve known for a very long time happened to show up. This made me enjoy the programs so much more since not only was I meeting new people, but I also felt comfortable with friends I already knew. So, of course, I had to get them to join as well.

Soon after that, I was given the chance to take on a small leadership opportunity and found myself making dumb videos for the chapter Instagram wishing people happy birthday as the ‘sunshine boy’. This also helped me get to know more people, even though programs at that point had been moved online. Another thing that really helped me integrate into the chapter was the big-little initiative. Having a senior member focus on welcoming me definitely led to me getting much more involved in the chapter. My big, Ben Steinberg, did an amazing job learning more about me, passing down important things, and even convincing me he was someone else so well by telling me my big made him give me a gift package when it was from him all along.

Fast forward a few months and I’ve now been elected as Exodus’s chapter S’gan, gotten to know so many members, made a lot of close friends, shared some amazing memories with them, and I already have a drawer dedicated to all the BBYO swag I’ve received. I’ve learned some valuable lessons from the numerous opportunities BBYO has already given me, such as how to manage my time better between schoolwork, chapter board responsibilities, and time for myself. I can better see the happiness in life thanks to a workshop I attended during the International Convention, and I’m proud to be Jewish despite living in a world with some unfortunate hate.

It has only been a few months and joining BBYO has already affected my life so much. I can’t wait to see how the next few years unfold. Thank you for reading my slightly different story, and I’ll see you at Spring Convention!

Pictured: Josh Zaretsky being inducted as an Aleph at New Members Night.